Encore Performances of God of Carnage 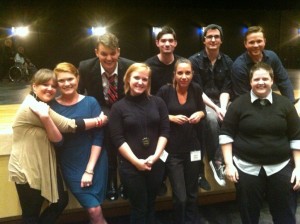 Encore performances of God of Carnage, will be held at Baytown Little Theater on June 27, 28, & 29 at 8:00 p.m. A reception in honor of the cast and crew will follow the June 29 performance. All tickets are $10 and reservations can be made through the BLT website (baytown.littletheater.org) or by calling 281-424-7617. Please, leave a brief message with your name, the show you wish to see and a phone number. A box office volunteer will return your call as soon as possible.

Since the year 2000, the Baytown Little Theater has performed for AACTFest with winning shows that advanced through the ranks of Quad and State. This year the BLT entry, God of Carnage, directed by Taylor Dobbs, advanced from State to Region competition held in LaFayette, Lousiana in March where they won 1st place in Region VI. The cast and crew has advanced to the AACTFest 2013 national competition to be held June 17-23 in Carmel, Indiana.

The talented cast consists of Amy Miller-Martin and Ryan Martin as Veronica and Michael Novak, Chelsea Denard, and Kenny Haney as Annette and Alan Raleigh. In addition the brilliant backstage crew includes Stephanie Whitley, Stephen Bent, Ryan Marshall and Dawn Daily. Jamie Garza also worked on crew for the festivals leading up to nationals. This talented group of people dedicated their time and energies to succeed at the highest level possible in AACT Fest 2013.

The play, written by Yasmina Reza, is a comedy about two pairs of parents, one of whose child has hurt the other at a public park, who meet to discuss the matter in a civilized manner. However, as the evening goes on, the parents become increasingly childish, resulting in the evening devolving into chaos.

Suggested for mature audiences only.