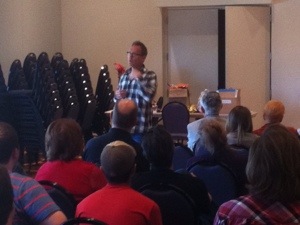 Saturday is the last day for the activities of the TNT Annual Conference, and as such it is packed with a variety of important activities. First on the agenda was helping make coffee for the attendees. As a primary corporate sponsor of the conference, Baytown Little Theater was acknowledged for providing the complimentary coffee, so we took on the task of making sure there was coffee made and ready for sleepy conferees when they arrived for their first workshops. After that, I attended an adjudication workshop discussing the ins, outs, and issues regarding judging play festivals, like picking winners and providing constructive feedback to participants.

The next workshop featured actor/playwright Del Shores, who wrote the comedy Sordid Lives, which was performed by BLT in 2006 and taken to this same festival in 2007. Hearing Shores discuss the sources for some of his fascinating comic characters was certainly one of the highlights of the week. The afternoon featured two play performances in the final show block: a deeply honest and revealing play about the tortured life of singer Billie Holiday, Lady Day at Emerson’s Bar and Grill, and featuring songs made famous by the legendary songstress; and Five Nickels, presented by S.T.A.G.E. Inc., Bulverde, a pleasant romantic comedy of two lonely middle-age friends meeting at church.

The evening will culminate in the gala and awards ceremony, at which the results of the festival will be announced. We are excited to share these with you. Stay tuned.

Theater teacher/director. Currently serving as president of the Baytown Little Theater
View all posts by Kim →
This entry was posted in Uncategorized. Bookmark the permalink.