Sometimes community theater offers rewards in ways that we do not expect. We love to hear the applause and laughter coming from our audiences, and a handshake, a hug, or a pat on the back after a performance is welcomed, but every once in a while, a special delight is offered us that goes beyond the ego boost of that recognition. 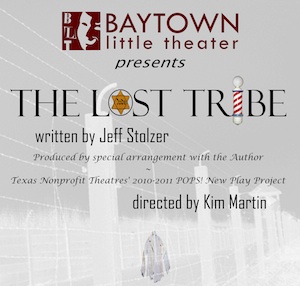 Our recent World Premiere, in our May production of The Lost Tribe by Jeff Stolzer, offered several such moments. We were delighted to share our performance with the author, who traveled from his Manhattan home in New York City to join us for the opening weekend. Jeff was generous in his assessment of how we brought his play to life, and we were happy that the show fulfilled his hopes and expectations for a premiere production.

The Lost Tribe also found connections in unexpected places, from BLT patron Dr. Jim Bernick, who grew up in the neighborhood of Los Angeles represented by the barbershop setting, and who offered a wise recommendation that a photo of LA Dodger and Hall of Famer Sandy Koufax would undoubtedly be hanging on the wall of THIS barbershop (that suggestion was immediately incorporated into the set decoration), to the many patrons who approached us after the performance, relating how this production has really made them think, not only about the historical aspects of the Holocaust that are a part of the events of the twentieth century, but about the implications of the play for tolerance in twenty-first century current world affairs.

Perhaps the most inspiring experience came on the Friday night of the final weekend when our performance was witnessed by several folks from the Holocaust Museum of Houston. Among the representatives was Houston resident Zoly Zimir, himself, like the character of Ruth in the play, a survivor of the Rumanian persecution by the Nazis and their puppet dictator, Ian Antonescu. He stayed for a while after the performance and generously shared his own experiences of doing “whatever it takes to survive”, one of the central themes of the play. Perhaps he, more than any of the rest of us, understood what it means to dwell in the grace we offer each other as we struggle together through the pains and sufferings of life.

And now, in our summer offering, BLT highlights its Fiftieth Anniversary Season with 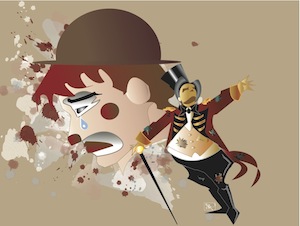 a musical that pleases the eyes and ears, delights the sense of humor, and challenges us again to think. You will enjoy Roar of the Greasepaint, Smell of the Crowd on so many levels, with the ever-popular songs, the energizing urchins’ chorus, the hysterical comic performances, but don’t neglect to look beyond the obvious at the deeper eloquence of this congenial and stimulating allegory. You may take away some ideas that you did not enter the theater with. Please come join us for some inspiration.

It is our honor and blessing as members of a theater community to share in this opportunity to make our community richer.