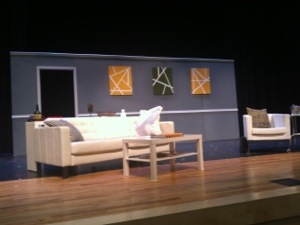 As I write this, the cast & crew of BLT’s God of Carnage, preparing for their performance at TNT’s AACTFest at the Medical Center of Lewisville Grand Theatre, are demonstrating their focus and dedication to putting on the best show they can. Under the direction of Taylor Dobbs, this group is well disciplined, with time spent getting the placement and assembly of the set pieces located precisely and acting exercises a part of their rehearsal ritual, even though a complete run-through is not on the agenda for tonight. This is all about becoming familiar with the stage, and moving the performance they’ve nurtured in rehearsals back in Baytown to a stage they’ve never seen before tonight.
So AD Jaime Garza, SM Stephanie Whitley, sound tech Stephen Bent, and crew member Ryan Marshall hustle about seeing to detail, Kenny Haney & Ryan Martin wield their tools to assemble the set pieces, and Amy Miller-Martin and Chelsea Denard take care to make sure the furniture is spaced perfectly, even as these same actors give their ear and their energies to follow the guiding directions of director Taylor Dobbs. This group is representing the Baytown Little Theater just as we would want them to do on any stage in the country. Break a leg, G of C.
Click here to learn about Lewisville’s Grand Theatre.