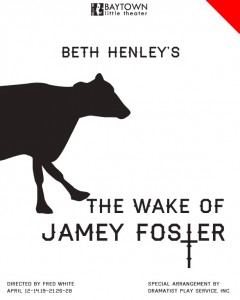 Auditions for the next play, the second in the 2013 Baytown Little Theater season, Beth Henley’s dark family comedy The Wake of Jamey Foster, will take place Sunday, February 17, and Monday, February 18, at  7:00 PM, at the theater’s location, 4328 Hugh Echols Blvd. Director Fred White will be looking for a cast of 3 males and 4 females to bring Henley’s “Southern sense of the grotesque and absurd as experienced in daily existence” to life.

Henley was recently represented on the BLT stage with a second production of her play Crimes of the Heart, in the 2010 season,  first produced at BLT in 1996. For more details about the upcoming production, see information at this link.